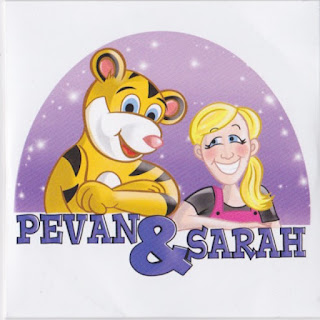 Pevan & Sarah are a musical duo from Melbourne, Australia.  Their debut album is an interesting mix of musical genres, including, jazz, blues, pop, rock, and even reggae.  Apart from its musical merits, the album also provides teachers with a number of useful educational themes to incorporate in the classroom.  Lead vocalist Sarah has used her experience as a teacher to create a musical soundtrack that deals with the numerous challenges teachers face every day.  The main themes include friendship, adventure, acceptance, hygiene, cooperation and exercise.  So let’s put on our dancing shoes and explore the content in more detail, beginning with the theme of friendship.


The lyrics to the song “Friend,” highlight the importance of inclusivity, the complexities involved in negotiating friendships, and further advice on how to be a good friend, such as using ‘friendly words’.  The music is funky and easy to dance to, with a dynamic guitar, competing for space with some interesting sound effects.  The chorus unfolds like a musical spelling test, with each letter of the word F-R-I-E-N-D chanted in hypnotic rhythm.  The lyrics also really hit the target as we are advised that ‘if we stick together good friends we could be’.

There is also plenty of opportunity for adventure on the CD, as the listener is catapulted to a number of exciting destinations along the way.  Our first stop is a “Space Ride”, where keyboard pads combine with slap bass to propel the listener into orbit in true eighties fashion.  “At the Beach” takes us into blues territory as we are reminded to ‘slip slop slap’ on our way.  The song begins with an extended drum pattern, before a lyrical account of our beach necessities blends with backing vocals somewhat reminiscent of the Supremes.  Our trip to “The Circus” also has its roots steeped in the blues, with some heavy keyboards underpinning a description of ‘all the things I see at the circus’.

Acceptance is another key theme on the CD, and is tackled with considerable expertise on the track “Get What You Get”.  The lyrics emphasise the importance of sharing, with the music exuding a laid-back rumba feel, capturing the mood of the song superbly.  Here we are firmly informed that ‘you get what you get and you don’t get upset’, and this ability to fit such complex ideas into an instantly hummable chorus is very impressive.  “We’re All The Same”, continues the theme of acceptance, with lyrics explaining how we may all look different, but inside we’re all the same.  The song begins with a clever shuffle beat creating a nice country feel, and finishes in true seventies fashion with the bass line doubling the guitar riff.

‘The Tidy Up Song”, with its emphasis on cooperation, explores another key educational theme on the album.  The song has a noticeable jazz influence with the inclusion of double bass providing additional impact.  This song is invaluable if you are a teacher attempting to encourage jaded kids to tidy up.  The vocals provide further encouragement from Pevan & Sarah themselves, who can be heard leaping and yelling in the background urging the children to join. The lyrics demand that we ‘put things back where they belong’ and also advise us to ‘work together and it won’t take long’.  We even have room for a countdown at the end, a teaching technique that is sure to get the kids moving.  “Stop Look And Listen” brings us into classic rock territory, with the inclusion of a surprisingly heavy guitar.  The chorus explores the tipping point for teachers where they are advised on how to stop the class when it gets out of control.  The music reminded me a little of “We Love To Boogie” by T. Rex, now there’s a blast from the past.

“Hands” focuses on the importance of good hygiene; which serves as pretty useful advice to prep students who are liable to get their hands dirty. The song is also interactive and great fun, encouraging the children to use their hands in a variety of fun activities including clapping, pointing and high fives. The music has a noticeable reggae feel, and bobs along with a stabbing keyboard, and a deep bass line which interestingly follows the melody on the chorus. I imagine that if Bob Marley or Peter Tosh wrote a song for kids it would probably sound something like this.

“Keep It Moving” explores the importance of exercise through lyrics, which express the need to keep your body moving.  The staccato drum pattern dominates the song, which unfolds like a kind of military manoeuvre. “The Freeze” continues the theme of movement, with music designed to accompany the lively game of musical statues.  The music is engaging, and the space between the tracks provides the necessary dynamics for this hugely popular musical game. The song also adds an interesting seventies flavor to the proceedings with shades of the Jackson 5 on display.

This CD serves as a musical guidebook on how to motivate, mollify and instruct young children. The lyrics are informative and the music is engaging.  I’m sure the album would appeal to both teachers and parents keen to motivate their children when they find themselves ‘bored with nothing to do’. The production of the album is first rate, with a real clarity of sound, ensuring you can always hear the lyrics.  Furthermore, many of the tracks feature enthusiastic vocal outbursts in the background from both band and kids, giving the album a real party feel. Although the major influence appears to be eighties electronic pop, the album integrates a number of different musical styles, and is produced and performed superbly by Pevan & Sarah.

Pevan & Sarah – something for everyone.

Posted by Dez Staunton at 09:48 No comments: 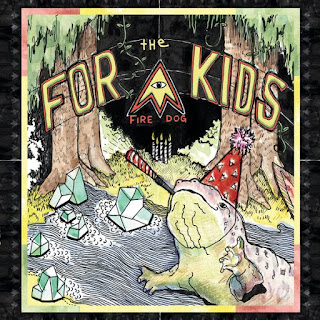 Fire Dog are a three-piece band from St Louis, USA, who describe themselves as a ‘pop rock harmony explosion,’ and on hearing their album, I couldn’t have put it better myself. Although the band generally plays to adult audiences, they have released their new album For The Kids after numerous requests to do so from their fans.  The result is a superb album containing seven songs that are original, upbeat, engaging and delivered with fine musicianship throughout.  The album also contains an array of interesting and diverse subject matter ranging from eventful birthdays, to historical characters, to conservation and beyond.

The album kicks off with the lively “Everybody Has A Birthday”.  Here a grungy guitar sets the overall tone of the track, providing a soundtrack to the various rituals of birthday parties, with a particular emphasis on food.  We are reminded not to forget the ice cream during this festival of fun, which is clearly a birthday party that ‘rocks’.  The guitar solo is pure grunge, intense and to the point, with children’s backing vocals adding a shade of charm to the proceedings.  The bass improvises with some expertise towards the end, and we are also treated to a lively drum solo unusually early in the proceedings.  Clearly the band is quite at ease playing live, and does so with impressive verve and spontaneity.

“You Don’t Know My Mama” has a gentler feel; it is slightly funky, melodic and engaging in a melancholy type of way.  We are informed that Mama who is clearly the hero of the hour ‘is sweeter than a sweet potato’. The addition of a piano adds further texture to the overall sound.  The song also includes a spoken tribute to Mama, which begins like Elvis before metamorphosing into an engaging rap.  Again the bass is imaginative and experimental and deviates from the script throughout.  I’m sure no major record company executive would have approved such an ambitious arrangement, and the song is all the better for it.

“I Love Myself,” is delivered with a grungy laid-back guitar, accompanied by lyrics that illustrate the multiple reasons to feel good about yourself.  These include ‘being talented, lucky and cool’.  This is a great message for young people, expertly assisted by some spirited kids’ backing vocals providing additional enthusiasm to the track.  To add further chaos to the proceedings, the song finishes with a guitar solo that reminded me of something Slash might have attempted back in the nineties.  Those were the days my friends.

“Hellbender” is the single taken from the album and is a tribute to Missouri’s Hellbender the largest salamander in North America and a native amphibian to Missouri.  The track also features a voice over by renowned Canadian folk icon and activist Bruce Cockburn.  The song itself reminded me a bit of the Doors, with shades of Blondie thrown in for good measure.  The middle eight features a spoken voice, which is delivered in the style of a radio broadcast.  The lyrics describe the threats to this endangered species, with authentic background noise leaving the impression that the recipient is actually tuning in to listen.

“Bessie Coleman” provides a tribute to the first female pilot of African American descent, exploring her life, how famous she became and all the resultant media attention.  The song itself powers along in uncompromising fashion with a no-nonsense message musically elaborating on the prejudice of the age.  However the chorus is uplifting, optimistic even, perhaps implying how Bessie overcame the many challenges of life, and all these ‘obstacles never giving up her dream.’  Despite the grungy garage vibe, the song is catchy, kid friendly and upbeat, with a chorus that truly soars like an aeroplane. I literally had it swirling around my head all day.

“Chame” mixes an interesting bass line with an acutely percussive rhythm to create a lovely ska feel.  The song discusses the plight of indigenous people, their ancient language, and the stories they tell.  The title apparently means ‘let’s go’, and some of the lyrics use the indigenous language to pursue the message. The guitar part that ensues is more melodic and suits the ska feel with its slightly cleaner sound.  The song also benefits from some interesting key changes at the end, and elaborate percussion finally giving way to some crunchy power chords bringing up the rear.

“For The Birds” is quite simply brilliant, and provides a perfect finale to the album.  The song itself is quite stripped back, with perhaps no more than four chords on display, allowing space for the lyrics to really soar.  The song also benefits from a quite mesmerising piece of guitar work, which literally lifts you off your seat.  The major strength of the track is its instantly hummable melody, which is both unique and original.  The additional children’s backing vocals add further dynamics to a song, which for me is clearly the best track on the album.

This album is great fun, has musical depth, and contains interesting subject matter.  The tone is upbeat and positive, and there is literally never a dull moment.  The album is packed with songs that are diverse, imaginative and brimming with pop sensibility.  There is also a wonderful spontaneity to the music, with the band leaving the impression that they have recorded the entire album jamming in the garage.  Despite the somewhat organic delivery, the album is well produced, and superbly arranged throughout.  The songs have heaps of attitude, are full of energy, and contain melodies that are second to none. Despite its brevity, the album clearly succeeds in providing an authentic message brimming with energy and optimism for the twenty-first century.

Fire Dog – bold, intriguing and brilliant.
Posted by Dez Staunton at 16:07 No comments: