Album Review: Why Is The Sky Blue? - Nick Cope 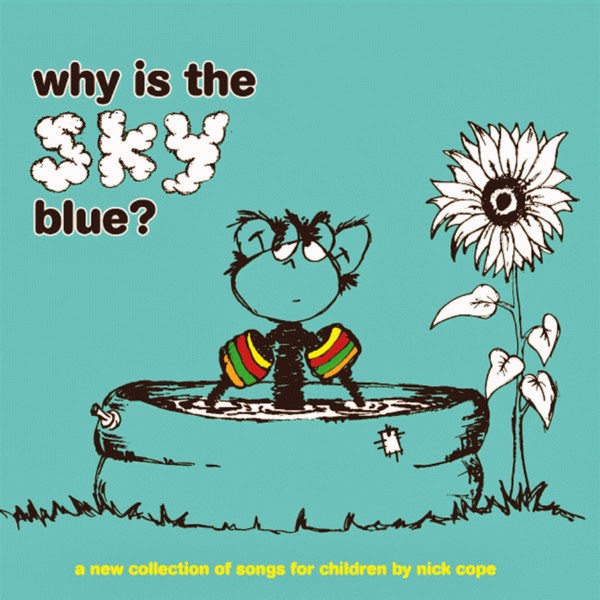 Nick Cope is an English musician based in Oxford, and former front man of nineties indie rockers The Candyskins.  Nick has already released three albums, and his latest effort, Why Is The Sky Blue? is superb.  Released in 2012, the album contains ten highly memorable songs that demonstrate his ability to skillfully merge a number of influences to create a highly unique sound.  Furthermore, the songwriting is of the highest standard, and delivered with top-drawer musicianship.

Indeed every song is a winner.  The title track “Why Is The Sky Blue?” is reminiscent of Ray Davies at his best, "Wobbly Tooth” adapts a traditional nursery rhyme with precision and flair.  “Dirty Washing” and “Crazy Dinner Lady” both benefit from some beautiful guitar picking.  “There’s a Nose in the Middle of My Face” is delivered with a hypnotic, almost Andy Partridge intensity.

Other standout tracks include “Whole Lotta Fun,” an action song celebrating togetherness and unity with its truly anthemic chorus.  “Pizza pie", with its slight country feel, describes the delights and hazards of baking and distributing pizza.  “Snowman Kind Of Day” has some uplifting children’s harmonies on the chorus. “The Story Of The Very Silly Dog,” is more punchy and up tempo, and “Tidy Up”, a song reminiscent of “Raindrops Keep Fallin’ On My Head” may enable the over stressed teacher to restore order in the classroom.

The production is simple and effective, allowing the rich variety of melodies and technically perfect vocal delivery to really soar.  The acoustic guitar is played superbly throughout, and the tasteful use of strings adds a warm texture to the overall sound.  Although this is essentially a fun album with plenty of sing-along tunes, occasionally, songs such as “Crazy Dinner Lady” reveal a slight hint of melancholy, unusual on a children’s album, but rewarding for the listener.

Although the album appears to have no obvious theme, the title track “Why Is The Sky Blue?” suggests the songs may have been pitched at the enquiring mind of the young child and their early experiences, both visual and physical.  Whether they are wrestling with a wobbly tooth, having to help tidy up, learning to share food, or simply staring at the sky in wonder, early critical awareness and the importance of developing negotiation skills are clearly addressed.

This is a truly outstanding album, well written, and superbly produced, containing great songs, which should appeal to both young and old.  Nothing sounds contrived, the lyrics tell their own story, and are delivered with the kind of heart-felt emotion, which engages the listener throughout.  If you are a fan of the Lightning Seeds, XTC, Pulp or Scritti Politti you will love this album, and I am sure your children will too.

It seems Britpop is back, but this time for the little ones.
Posted by Dez Staunton at 10:41 No comments: 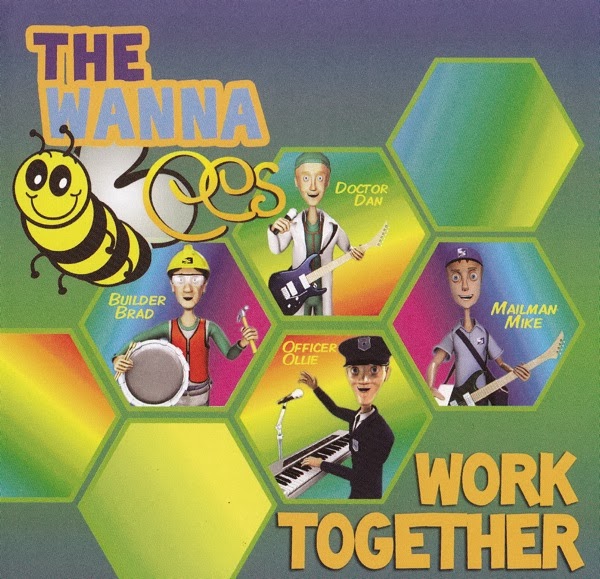 I received this goody in the post the other day – Work Together ­– the debut CD from The Wanna Bees.  All the way from the USA how cool is that!  Well what can I say about The Wanna Bees?  First of all what a great name, inspired by the big question, “What do you wanna bee when you grow up?”   Well kids, if you don’t know yet, this CD will inspire you in a fun and entertaining way.

The album emphasises ambition, positivity and the importance of making a contribution to society by doing what you love.  The track, “What U Wanna Bee” sets the tone, inviting the listener on a musical journey where ambition and insight combine to point to a future where the sky truly is the limit.

Essentially, the songs are based around the four main characters in the band – Builder Brad, Mailman Mike, Doctor Dan, and Officer Ollie.  The songs also describe their individual friends who accompany them in their roles.  Whether it is Hammer Hank who is not “the sharpest tool in the shed”, or Eddie the Envelope who is in search of a stamp, Betty Badge who stands for honour and justice, or Henrietta Heart who resides in everybody, these loveable characters help kids to further engage with the music.

The opening track “Work Together", for me is arguably the best track on the album; strong on message, but also delivering a brilliant sing-along chorus, almost reminiscent of The Who’s “Join Together”.   “Hammer Hank” is irresistible with its melodic vocal delivery and quirky rhythm.  “Lub-Dub Lub-Dub” interestingly compares the sound of a heartbeat to a garden hose pumping blood around the body.  “Mailman Mike” is a gem of a song, with its confident delivery and knockout tune.  “Officer Ollie” uses a very cool military beat, perhaps emphasising the regimented system of policing.

If I was to take a stab in the dark I would pitch the band’s influences as somewhere between The B52s, The Wiggles, and the Cars, although such a narrow pool probably doesn’t do them justice.  The songs really are at times quite anthemic, incorporating live instrumentation, imaginative arrangements and a radio friendly sound.  The album is well produced, and features seasoned musicians.

The band’s sound is built around the strength of Chuck Riepenhoff’s voice, which is inviting, warm and resonates with a noticeable originality.  The keyboards and guitar float around the songs adding a kind of cool melodic ambience, and the rhythm section of Brad Bury and Mike Hayden is both nimble and tight.

There is also a tremendous range of styles on the album.  “Cough, Say Ahh” combines an interesting fusion of pop and rap, “Getterdun!” has a lovely country feel, “What U Wanna Bee sounds” like 70s New Wave, “Put A Stamp On Me” has an interesting shuffle beat which ups the tempo, perhaps suggesting speed of delivery. The repeat refrain at the end, “come and dance along with me” with its reggae style of vocal delivery, could almost be sung by Bob Marley.   “Betty Badge” is perhaps as close to rock as you can get.

This is definitely an album that will appeal to the kids, but I reckon the parents will enjoy it too.  If you are interested in this band (and believe me you should be) check out the single “Get Up And Get Out”, which was released In 2013, and serves to motivate children to exercise.  Already creating a buzz in the American kindie scene, The Wanna Bees serve as a real inspiration to children, so if you want to sing, dance, have fun and be inspired, check out The Wanna Bees coming your way.
Posted by Dez Staunton at 16:03 1 comment: