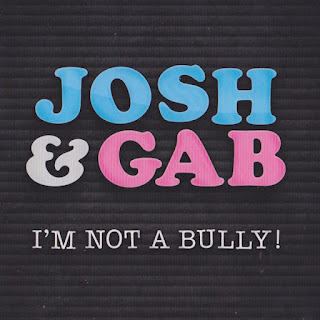 Gab Bonesso is a nationally renowned comedian, performer and comedy writer. Josh Verbanets is an award winning songwriter, singer and musician. Together this dynamic duo have developed a unique sound for children of all ages, through the use of original songs which celebrate creativity and suggest alternatives to negative behaviour. Their new album I’m Not a Bully is an absolute gem fusing garage punk with pop sensibility and is available now on Fake Chapter (Music is Family) Records.

The opening track “Everybody Clap Hands” is a high-energy melodic pop song, with soaring melodies and a backing track that would make the Ramones proud.  The message explores the social challenges facing vulnerable children in unfamiliar situations, such as the playground or the school bus.  Ultimately, the sentiment is celebratory in tone, with the fear acknowledged and yet overcome in a union of togetherness and victory.

“Nine O Clock Behind The Jack Rabbit”, opens with a riff that reminded me a little of Television’s “Marquee Moon”.  Again the theme explored here is fear, but this time in anticipation of a fight in which the singer doesn’t want to be involved.  The song is hypnotic and melodic with uplifting melodies throughout.  Here the inner workings of the mind of a child are explored and in particular the vulnerability felt from the conflict set to occur at nine o’clock.  There is also an interesting contrast between the sprightly melody, and the darkness of the subject matter.  Again the problem is overcome, emphasising how the creative mind can assist in the elimination of such challenges.

“Door In The Floor” introduces a female voice, and is completely different in style with the somewhat jazzy vocals on display elaborating on the threat of rats roaming around the house.  This brief departure into American jazz is in complete contrast to the following track, “I’m Not a Bully” which opens with a guitar riff that would sit quite happily on a Led Zeppelin album.  Here the lyrics are no-nonsense and uncompromising as the singer chants the declarative statement ‘I’m not a bully’ into a melting microphone.

“I’m A Leader”, again provides a further shift in tone, as it is noticeably gentler in delivery.  The song encourages children to make the right choices, including telling the truth, and treating others like you would like to be treated.  The music has an interesting kind of jagged feel, before it really opens up at the end to provide an array of sounds that really bring home the point.  The song revels in a display of melody, which is both catchy and uplifting for the listener.

“Hurry Up And Get Well” is a gentler ballad with a stunning melody that I literally had swirling around my head all day.  Again the reciprocal vocal technique is used, along with a string arrangement on the chorus to add a fuller sound, providing further dynamics.  The overall strength of the song can be measured by its sweet simplicity, allowing the melody to soar and the clarity of the vocals to really hit the target.

This mini album is well worth a listen.  It is highly melodic, with interesting arrangements, and excellent musicianship.  The musical themes on offer are diverse, engaging and offer advice to young children on how to negotiate a variety of difficult situations.  This really is music with a message where some of life’s early challenges are tackled head on.  The music moves with the message, hard and uncompromising at times, sweet and soulful the next. This is a great album for playing in the car before dropping the kids off at school, enabling them to absorb the positive advice on display.  For me the ultimate success of the album is the way in which the songs deal with difficult subject matter in a fun and engaging way.

Josh and Gab’s I’m Not A Bully - music with a message that needs to be heard!
Posted by Dez Staunton at 14:31 No comments: