Video Review: I Am A Robot - Kymberly Stewart Music

Kymberly Stewart is a singer-songwriter from Los Angeles, California. Her songs promote positive themes built around an eclectic mix of musical influences including jazz, gospel, hip-hop and soul. Her new video for her song "I Am A Robot" is hugely entertaining, and all you parents and teachers out there should check it out at your earliest opportunity.

The footage begins with a somewhat theatrical introduction, outlining all the fun that lies in store, which reminded me a little of Deee-Lite’s intro to “Groove Is In The Heart”. It is not long before the action starts, and as the song proceeds; there is no shortage of children willing and eager to participate.

The song arrangement is in the cumulative tradition, with the actions becoming more complex as the song progresses.  The track therefore, serves as a call to action with an ever-increasing number of moves required to perform along the way. It’s hysterical the way the children imitate these actions determined and undeterred throughout, despite how complex the sequence becomes.

The video features some interesting computer graphics throughout, with robots spinning around the screen, and water appearing where the children are encouraged to swim. These effects however, are used tastefully, and don’t detract from the overall impact, but provide an additional narrative to further complement the video.

The song also includes an interesting twist at the end where the robot’s batteries begin to drain, and the children slow down their movements accordingly.  We are ultimately left with the unfortunate demise of the robot, and... I’ll let you discover the rest for yourself.

Kymberly Stewart’s appeal lies in her authenticity, and her genuine passion for music, which is superbly captured in this video. Her enthusiasm is infectious, and the video highlights the way she effortlessly inspires everyone around her. The footage is humorous and engaging, and would provide suitable light relief for parents and teachers looking for something different to entertain the kids.

Kymberly Stewart's "I Am A Robot" – fun for all the family!

Please Note: There are two videos for "I Am A Robot", and this review refers to the new, updated version, which was uploaded on 27th June 2020. You can check out the original video on the Kymberly Stewart Music Channel on YouTube.

Posted by Dez Staunton at 09:06 No comments: 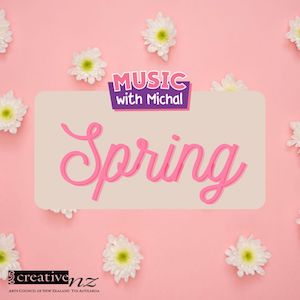 There really is some tremendous music coming out of New Zealand at the moment, and it doesn’t get any better than the new single “Spring” by singer-songwriter Michal Bush from Music With Michal. The single is taken from her debut album Can You Make Music?, which is released on 18th September. So, if you like the type of folky acoustic pop that made Joan Baez famous, you really need to check out this artist.

“Spring” is one of fifteen tracks featured on the album, and is a delightful composition perfectly timed to greet the new season. The arrangement is clear and sparse throughout, with what sounds like two acoustic guitars sharing the chords and the melody line between them.  You can tell by the dexterity of the guitar picking that Michal clearly knows her way around the fret board.  The music paradoxically, seems to combine melancholy with joy, and does so in a way that cuts deeper than many traditional children’s songs.

The melodic beauty of the voice is only matched by the poetic charm of the lyrics, where she cleverly refers to the arrival of the new season like an old friend she hasn’t “seen for a while”.  She can whistle as well, with her dulcet tones mirroring the melody of the song very effectively. She’s in good company here, as both David Bowie and Bryan Ferry have demonstrated this technique on classic hits such as “Golden Years” and “Jealous Guy”.

The lyrics clearly capture the beauty of a spring day, and do so with simplicity of wordplay that even Wordsworth might appreciate. Despite the eloquent description of the new season, she still finds the lyrical space to include some action moves which are sure to be a big hit with the kids.  These include jumping clapping, spinning and shouting, performed with tremendous enthusiasm by a charming selection of children on her new video.

This song is an absolute gem, and delivered with supreme confidence from a very exciting artist.  Despite all the uncertainty surrounding the world at the moment, the song succeeds in piercing the darkness, serving to remind us of the role nature plays in providing restoration and healing.  The hypnotic effect of this song is all consuming, and is sure to add sparkle and zest to your day.  Furthermore, it creates a sense of well being that leads the listener to conclude that perhaps all is well with the world after all.

Music with Michal – breathing new life into the world around us.

Posted by Dez Staunton at 18:08 No comments: