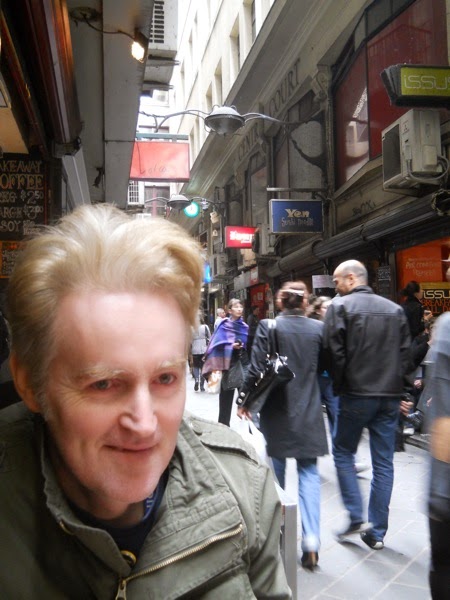 You may ask yourself what is kindie rock?  And the question this time won’t come in the form of a twenty-first century rewrite of the Talking Heads classic, “Once in a Lifetime”, but from the accumulated interest of an inspiring musical genre - namely kindie rock.  So what is kindie rock?  Salon defines it as a type of children’s music that ‘melds the sensibility of the singer-songwriter with themes aimed at kids under ten years of age’. Furthermore, it is a sound that brings music and families together, with the music often appealing to both young and old alike.  This has resulted in a shift from the time when parents would venture out to watch their favourite artists at night, unaccompanied by their kids, to a new paradigm where parents and children can now enjoy the same music together during the day.

Kindie rock is already well established in the USA with the likes of Dan Zanes and They Might Be Giants leading the way.  For many Australians, the dominance of the mighty Wiggles over many years has meant the Australian public is largely unaware of many of these innovative artists who operate outside the mainstream.  The reality is kindie rock is hip and happening throughout Australia, and nowhere more so than in Melbourne.

Everybody loves Melbourne, whether it is the Australian Open, the Melbourne Cup or the best coffee in the Southern hemisphere, Melbourne has always been the place to be.  From The Seekers to The Birthday Party, over the years Melbourne has provided the world with an array of outstanding musical talent that continues to expand to this day.  In the light of all this, perhaps it is about time we explore some of the artists currently embracing the kindie rock genre emerging right in the heart of this great city.

These include The Kazoos, Little Feet Music, The Mudcakes, The Mighty Buzzniks, The Rrrrrockets and Zucchini Clan.  All these bands share similar features, as they are great live, play original music, perform copious gigs and all offer something different from the mainstream.  Indeed they are part of an organic movement, which is actively growing, and inspiring children and families in ever increasing numbers.  Consequently, they have given a new collective voice to the Melbourne music scene, but this time for families.  Despite the similar strengths of these bands, they all have their own unique and individual approach, an approach that is certainly worth exploring in more detail.

Kicking off with The Kazoos a duo that combines early childhood educational principles, with a theatrical and hilarious live show.  The Kazoos is the brainchild of husband and wife team Chris and Celia Hill who use comedy, theatre and music to engage their audiences.  Standout songs such as “The Funky Shuffle” and “The Animal Walk” encourage movement and dancing, further complementing the interactive dynamic of the show.

The natural rapport between Chris and Celia forms the bedrock of their live performance. With a bright and colourful image, and an impressive set of props, the band literally transports their audiences to another world.  This is a world of theatrical interaction, underpinned with catchy songs that are easy to dance to.  They clearly play to their strengths, and must be doing something right, as they have already built up an army of fans including a number of famous musicians and celebrities.  Kasey Chambers has expressed how much her ‘little boy loves the Kazoos’, and Chris Cheney from The Living End is also a huge fan.

Next up, Little Feet Music, who I was fortunate enough to see perform live at the Rhymes Festival in Melbourne in 2012.  Their live show impressed me a great deal, and encouraged me to dig a bit deeper.  Singer-songwriter Rachel Parkinson is the creative powerhouse behind Little Feet Music, and has been involved in the entertainment industry since the early nineties.  Having played in a number of bands, and on a variety of instruments since the age of sixteen, her vast experience has proved invaluable over the years particularly in the live format.  The Little Feet Music live show is well worth watching, as Rachel has amalgamated an impressive array of musicians, well capable of delivering a highly entertaining, and colourful performance.  However, Rachel’s primary motivation appears to be educating and inspiring children, with education lying at the very centre of her artistic approach.

Her new CD Giggle Jiggle featuring songs such as “Five, Four, Three, Two, One”, point to a new fun way of learning, adding further potency to her music.  She has taken this educational ethos a step further by running her own music classes where her musical expertise and ability to engage with young children aims to unlock their creativity, open up their imaginations and stimulate their senses. I’m sure William Blake would have approved.

It is difficult to ignore a band with a name like The Mighty Buzzniks, who perform smart, insightful crisp rock music for kids.  Again like the previous bands mentioned, they have a great image and are excellent live, but for me their major appeal lies largely in the strength of the songwriting.  To date the band have released two CDs The Great Space and Bug Out, which are both brimming with memorable tunes.

Jamie Saxe is the lead singer and main composer of the band, and is a formidable songwriter in his own right. If you won’t take my word for it, he recently achieved international recognition for his composition “Ow Ow Ow”, reaching third place in the hugely competitive International Songwriting Competition 2013 - no mean feat.  The songs do most of the heavy lifting in this band, sure they look great, and can all play well, but it is the songs that give them the edge.

The Mudcakes are an Australian-American duo featuring key members Sherry Rich and Boston’s Rick Plant.  Both members have a rich musical pedigree, which has enabled them to stake their claim at the very forefront of the kindie music scene in Australia.  The band has already released three critically acclaimed CDs to date.  Stand out songs include “Monkey Boy”, “I’m a Sock” and my own personal favourite “Jump”.  The major strength of this band for me however, is their authenticity.  It becomes increasingly obvious when you see and hear The Mudcakes that there is genuine vitality in the music, leaving the recipient with the impression that the band literally live and breathe their craft.

Their sound is melodic and lively, but more importantly authentic and uncontrived.  They come across as the kind of people who would turn up at a dinner party with a guitar and burst into song at any given moment, and not take themselves too seriously in the process. In short, The Mudcakes provide a refreshing and authentic alternative to some of the more prosaic and contrived acts dominating the mainstream.

With an eclectic sound that combines big band, rockabilly and ska, The Rrrrrockets deliver an interesting variety of musical styles, which take the listener on a nostalgic musical trip down memory lane, with a focus on maximum fun.  Everything from Madness to The Monkeys can be heard, with the band quite adept at switching between different musical styles between each and every song.  The band also has a great image, and when playing live take their audience on a journey of retro musical styles with their own original interpretation. Maximum fun, maximum entertainment, and compelling content, enough said.

Last but by no means least Zucchini Clan, who look like a bunch of psychedelic leprechauns, flown in especially from Ireland to wreak havoc.  They have described their live show as ‘a bit vaudeville, fae, with a twist of punk’, or alternatively ‘music for free range kids'.  I believe their music should appeal to all comers, with its unique blend of folk, punk and psychedelia, which reveals an undeniably original sound.

This band once again ticks all the boxes, as they are seasoned musicians, who clearly recognise the value of music and the arts, which they have described as ‘incredibly important in the intellectual, educational and spiritual growth of children’.  However, for me it is their originality that makes them stand out. From their name, to their sound to their image this wonderful, weird and wacky band have managed to explore the unexplored, venturing where no band has gone before.  Expect the unexpected here!

If you do happen to live in Melbourne, and are looking for something different, then it is definitely worth venturing out to see some of these bands.  You might meet some interesting people and have a great time along the way.  Many of the shows are like mini rock concerts, where kids get a chance to dance down the front, and experience the type of live concert they will no doubt encounter later on in life.  Wouldn’t it be great if your child could claim their first gig was The Mudcakes or Zucchini Clan, and perhaps then be inspired enough to pick up their own instrument of choice and have a go?  Melbourne has become the new breeding ground of kindie rock, now it’s time to jump on board and dig the new breed.
Posted by Dez Staunton at 09:56 No comments: