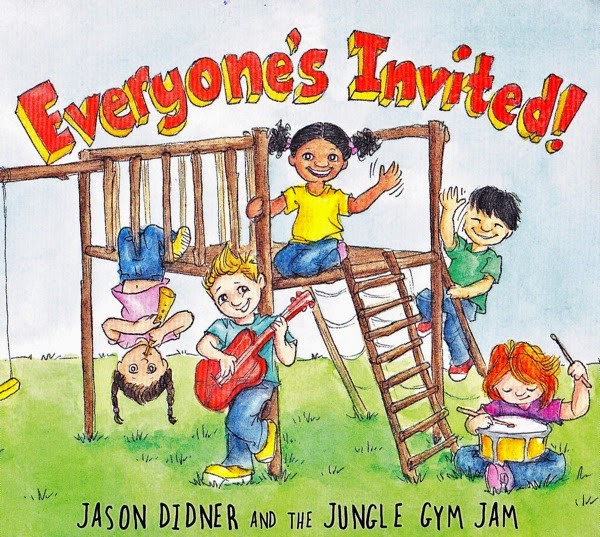 Hats off to Jason Didner and the Jungle Gym Jam for their impressive new album Everyone’s Invited. The album combines an interesting blend of fine musicianship, stirring melodies and lyrical flair, and is built around four key themes - kindness, active play, imagination, and love of learning.

The album kicks off with the rocking anthem “Jungle Gym Jamming”.  Here lively instrumentation and action packed lyrics set the tone, inspiring children to clap their hands and play their air guitars as they jam with their friends.  “Window of the Train” is more mellow and invites the listener to jump aboard in order to witness the “tall and shiny buildings” or the “cows grazing in the pasture”.  The song reminds us how simple everyday things can often be a source of wonder to the young enquiring mind.

“Five Sea Lions” would be a real asset in any classroom, providing a counting theme as the sea lions swim off to the shore one by one.  The lyrics are informative, effective and educational, and the song further benefits from a hint of ska in the rhythm, courtesy of some subtle bass playing and nimble drumming.  “The People Exhibit at the Zoo” reverses traditional roles, where the animals now scrutinise the people and ‘marvel at all the silly things they do.’  “My Glasses” has a funkier feel and celebrates some interesting benefits of wearing glasses.

“Mimi the Ladybug” has an almost English eccentricity about it, with its vocal delivery, somewhat reminiscent of Elvis Costello describing a ladybug who is amongst other things definitively ‘cute'.  “The Pick Song” uses a clever shuffle beat, and informs children ‘not to put the pick in their mouth, nose or ear’.  I hope all you kids are paying attention; a swallowed pick could be quite nasty.  “A Bowling Parade” introduces a delightful honky tonk piano, which for me really should have been louder in the mix.  Again the song benefits from a delightful chorus where we all ‘go bowling to get the ball rolling’.

“Shy in the Pool” begins with a hypnotic marching beat, and has a slightly Beach Boys feel, describing the reluctance of the child to leave the swimming pool.  The song explores the inner workings of the child’s mind with a relentless enthusiasm of delivery.  “Glass Bottom Boat”, a fascinating idea for a song, describes the variety of sea life on display such as the fish and ancient fossils on their ‘aquarium that floats’.

“Peak-A-Boo Moon” is a gentle ballad, which was apparently inspired by the singer’s daughter.  Here the moon becomes part of a kind of ethereal game of hide and seek which keeps the child guessing as to when it will reappear.  Finally, “Down by the Bay” finishes the album similarly to the way it starts, with an upbeat track, using a traditional tune, with its own unique twist.

This is a feel good album, which stands out as a result of its wistful melodies, poetic verse and uplifting harmonies.  It has a lightness of feel and yet it doesn’t lack punch.  It also incorporates some informative and positive messages, delivered with an original lyrical style.  It is not over produced, and is a triumph of the imagination over practicality and budget constraints.  This is clearly the party that everyone wants to be at, and fortunately Everyone’s Invited.