Album Review: In My Backyard - Spikey and Friends 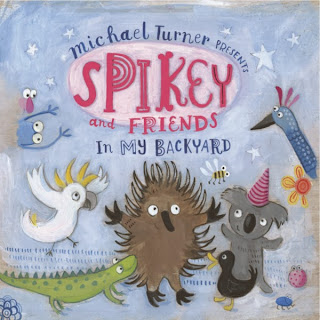 Mums, Dads, boys and girls, and all you environmental warriors out there, you simply have to hear the album In My Backyard.  I guarantee you won’t be disappointed. This is a celebration of all that is exciting about music, delivered by one of the best kindie rock bands around - Spikey and Friends.  If Radiohead made an album for kids it would probably sound like this!


My favourite songs are, “Paddle Bubble Swish” with its lucid description of a variety of water animals.  “Surfing Dolphins,” an idyllic tribute to a world where dolphins swim and dance in the ocean.  “40,000 Years or More”, with its potent sustainability message.  “Everybody’s Nose”, which reminds me of the Smiths at their best, and “Nature Sings”, which describes simple summer walks that even Wordsworth could relate to.

Teachers should note, that the album also benefits from a unifying theme, unfolding as an educational adventure, where children meet a number of animals that introduce them to the delights of music and nature.  A variety of native Australian animals are described throughout, but through an indigenous perspective, with indigenous values about nature, the importance of a balanced lifestyle, and the biodiversity of the country.

The album is brilliantly produced by singer-songwriter Michael Turner, and also benefits from high quality musicianship throughout, with some nimble and imaginative drumming providing the space for the songs to really shine.  The arrangements on the album are highly effective, and unusually subtle for a children’s album.  The songs are further enriched by the delightful children’s backing vocals, leaving the impression that a party is going on, we’re all invited, and everyone is having a great time.

The songs are easy to dance to, and prove both popular and useful in the classroom.  The track “Standing On One Leg” is an absolute must if you are a teacher searching for a suitable action song.  “Pretty Little Caterpillar” provides opportunities for children to crawl or fly around their own space.  “Old Man Bray” introduces a useful Australian twist to a traditional song.  “Five Slimy Toads” is a little brutal, but is useful for counting how many toads survive the onslaught of the motorcar, and “Koala Bedtime” uses the alphabet very effectively.

There is also tremendous musical diversity throughout.  “Spikey Ant Dance” boasts a riff that could sit easily on a Guns N’ Roses Album.  “Shake It Up” has a noticeable jazz influence. “Young People” introduces a hint of reggae and “Ginger Nut Pussycat” has a slightly country feel providing further diversity.
There really is something for everyone here, and clearly, plenty of thought has gone into making this album.  Spikey and Friends are undoubtedly Byron Bay’s best-kept secret.  So what are you waiting for?  Come on Australia, get out there and do the Spikey Ant Dance.

Posted by Dez Staunton at 15:51 No comments: