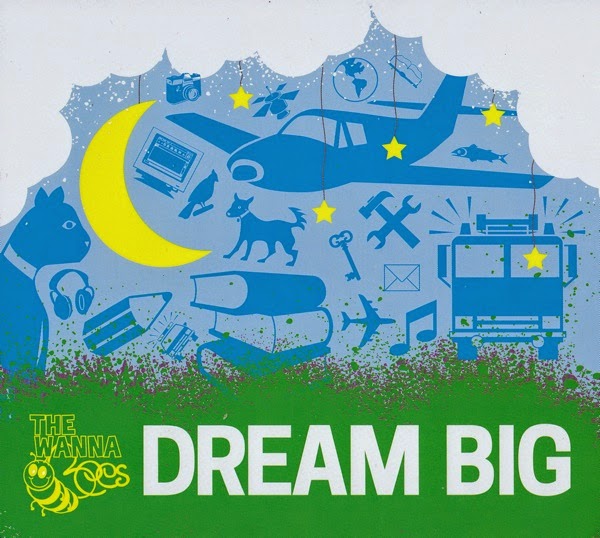 A few years ago I asked my daughter’s friend, then aged eight, what she wanted to be when she grew up.  Her response was quite elucidating, and perhaps typical for someone of her age.  She wanted to be an actress, a singer and a doctor.  No shortage of ambition here I thought.  Nonetheless, it seems that despite our best efforts, we are still subject to a somewhat flawed education system focused on circumventing the dreams and aspirations of children.  It is refreshing therefore, to discover a band, which have targeted this theme, and in doing so have managed to highlight the inner world of a child’s mind, one of seemingly endless possibilities.

Dream Big, the new album by The Wanabees, is the perfect follow-up to their debut Work Together, which I reviewed back in February.  Here we have a whole cast of new characters on display, including pilots, vets, school teachers and firemen introduced to inspire children and empower them to dream big.  The album is also literally brimming with funky rhythms, catchy melodies, and emphatic statements throughout.

The opening track “We are the Wanabees”, is something of a foot stomping crowd pleaser, which reminded me a little of “We Will Rock You”.  The song is a real statement of intent full of enthusiasm, and assisted by a highly effective horn section. “Do You Like” has a pulsating rhythm, and is used on a number of occasions throughout the album as a kind of persuasive chant to introduce each of the characters described.

“Valerie Vet” is more dance orientated, with a stop and start arrangement for additional effect.  There is also an imaginative keyboard on display, which further embellishes the sound, alongside anthemic vocals and pulsating drums.  “Stephanie Stethoscope” combines dance with heavy rock, as the lyrics demand to know ‘are you pumped up’?  Fireman Freddy has an interesting seventies influence, which conjured up images of Starsky and Hutch, if you’re old enough to remember them the first time round.  “Hooray for Heidi Hose” has some delightful children’s backing vocals, which soften what is a quite powerful and percussive track.  The middle eight sounds like you are actually experiencing the ride on the fire truck.  The keyboards again give the song something of a seventies vibe, although the main strength of the song is its superb melodic chorus.  “Pilot Pete” is another super song which reminded me a little of “Give Me Some Loving” by the Spencer Davies Group.

“Penny Plane” introduces some good old-fashioned rock and roll, more reminiscent of Chuck Berry’s “Johnny B. Goode” than the Beatles.  “Terry Teacher” combines rock and rap very effectively; with that notable seventies style guitar riff again dominating the sound, along with some highly charged drumming from Rob Donaldson.  “Charlie Chalk Board” opens with quite a grungy guitar, and some interesting keyboard patterns throughout.  The song is built around the rhythmic delivery of the title, with the chant ‘Charlie Chalkboard’ vehemently delivered into the microphone.  The lyric ‘he’s old school but we think he’s cool’, is perhaps referring to the proliferation of interactive white boards in classrooms.  The brass section adds further melody to the overall sound, as well as contributing to an almost reggae inspired finale.  “Dream Big”, arguably the best song on the album, brings up the rear with its powerful message right on cue.

There is no shortage of variety or imagination on this album.  The band has once again dreamed up an assortment of compelling characters, which they sing about with gusto and relish.  The songs are catchy upbeat and informative, and the individual musicianship adds an additional layer of melody to the overall sound.  You are left with the impression of a deeply committed band that really cares about their subject matter.  Furthermore, they have managed to capture the spirit of childhood ambition and dreams, through highlighting the importance of role-play in learning.  Full marks to The Wannabees and let the children play!
Posted by Dez Staunton at 10:20 No comments: