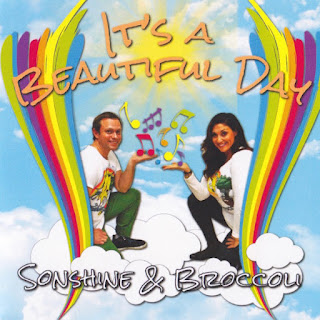 Since 2004 Sonshine and Broccoli have been making music for children and families with immense verve and vitality.  Hailing from Toronto in Canada the duo have released three albums to date, with the new album It’s a Beautiful Day, arguably their best yet.  The album features twelve original songs designed to capture the hearts and minds of children everywhere. It’s time to put on your dancing shoes because it truly is a beautiful day.

The album kicks off with the title track, a wacky weird and wonderful song, with vocals that reminded me a little of Lena Lovich in her prime, if anyone remembers her!  The tune is infectious and is complemented by a gentle rhythm, which enables the chorus to take off like a rocket.  “Wave Hello” is more up-tempo and has a funkier feel, although lyrically it is very much an action song, with the vocals delivering the specific actions required throughout.  The song also gives the listener an early hint of the vocal duets on display, which are used very effectively throughout the album.

“Sing It Out” remains true to its title and further benefits from some hypnotic piano playing, and a two-chord verse pattern creating the necessary space to let the chorus really explode. The chorus also utilises a very percussive lyrical delivery with soaring harmonies bringing up the rear. The middle eight sounds quite ethereal, leaving one with the impression that they are floating along to the music.  “A Good Night” opens with a dramatic dance rhythm and a guitar riff that Alex Van Halen would have been proud of.  Clearly there is nothing off the table here, with all musical genres up for grabs and eagerly seized on by the band. Again the lyrics are a call to action, as the band guides the children through a number of simple movements.

“High Five” has a more electronic feel with a self-explanatory title that features predictably on the chorus. The combination of electronic keyboards, a dance beat and vocals that mutate at times into a slightly rap delivery provides another interesting combination of musical styles.  “The Painter” takes us into blues territory, and is complemented throughout by an acoustic guitar and what sounds like a Hammond organ. The song recites the story of a boy who loves painting, and then describes the different types of imagery that appeal to him.  There is a real upbeat feel to this track, as we follow the boy on a cathartic journey where he learns to ‘paint his blues away’

“Makin’ A Fort” begins with backing vocals that could sit quite comfortably on a Beach Boys album, before the song reveals its country roots, with what sounds like a banjo and a fiddle playing off each other with great expertise.  This is true country style music with superb harmonies and a lively upbeat feel. “You Got Me” is more contemporary in style, with an infectious tune, and a groove that really hits the target.  The lyrics emphasise the importance of friendship, delivered with authentic vocals, which sounds both pure and sincere.  The song finishes with a lively electric guitar that wouldn’t sound out of place on an Isley Brothers album.

“Rock Paper Scissors” reminded me a little of the B52s with its upbeat delivery, potent electric guitar and lyrics that emphasise the importance of finding alternative forms of entertainment.  “Time Travel” really rocks, with a driving bass line and powerful guitar penetrating the sound in almost Pixies fashion. The lyrics then take the listener on a musical journey in time, from the dinosaur age to fifties beach parties.

‘Try Something New” introduces a noticeable change of pace; with a groove that reminded me a little of “I’m Yours” by Jason Mraz. The song reflects on some painful childhood memories including an ice-skating trip, and an introductory yoga class. Although the lyrics describe the fear and uncertainty involved, the outcome is optimistic emphasising the importance in trying something new which gets ‘a little better every day’. “Music Makes The World Go Round” is sparser, and informative with a driving bass line and a somewhat didactic lyric, which celebrates the importance of music.  We even have time for some musical solos at the end, played with the kind of flourish that should keep the kids bopping till they drop.

This album is energetic engaging and great fun.  The musicianship is first rate and although the arrangements are complex at times, they are not too complex to confuse younger listeners.  The vocal duets are equally strong and complement each other perfectly.  The music is quite difficult to categorise, because as soon as you hear a style emerging, it quickly changes into something different, sometimes even during the same song. The music appears to always be one step ahead of the listener, moving through different musical genres effortlessly.  The vitality of the album lies in the way the band manage to blend a variety of musical influences, yet retain an overall uniqueness of sound.  Perhaps most importantly this is a feel good album, which is great to dance to and is sure to engage the kids throughout.