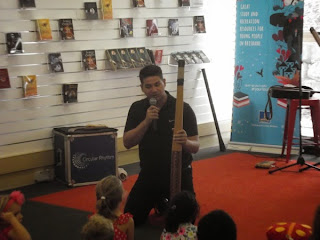 Circular Rhythm is the brainchild of Lucas Proudfoot a children’s entertainer and educator, specialising in interactive musical performances for children. These performances also incorporate musical demonstrations, and a historical background to a variety of instruments including the didgeridoo. He has a natural rapport with his audience, and the ability to create a musical workshop, which is great fun. Whether this is by incorporating musical games, or through his relentless wit, the show provides maximum entertainment for the audience.

Welcome to the Lucas Proudfoot show!

After paying his respects to the traditional owners of the land, Lucas begins with a blistering rhythmic guitar and a stomp box to get us under way. The children respond with great enthusiasm clapping along and nodding their heads to the rhythm. What is soon apparent is that Lucas is pretty much a stand up comedian in all but name. His ability to make the children (and the parents) laugh is impressive. This is achieved largely through a spontaneous wit, which takes full advantage of the unpredictability of children. Evidence of this is witnessed through the increasing numbers in the room, with punters eagerly filing in to discover what all the hilarity is about.

Throughout the show, Lucas performs on a variety of instruments with great dexterity. From the guitar to the stomp box to the didgeridoo, he moves effortlessly between each instrument providing a musical narrative to an appreciative crowd. He also readily invites children on to the stage to take part, distributing a variety of instruments, which the children seize with relish. His understanding of the importance of providing children with hands on experience of engaging with instruments is quite inspiring. Furthermore, an ability to remember every child’s name is another plus, along with his natural rapport with the kids revealing an impressive skill at working an audience.

Lucas, like an experienced conductor, is also able to direct this spontaneous children’s orchestra encouraging them to change the pace of the rhythm of the music for additional effect. This type of interactive demonstration through the intuitive guidance of children is really quite remarkable. Furthermore, his unique ability to demonstrate the type of circular breathing necessary to play the didgeridoo is fascinating to watch, as is his description of the way in which the diaphragm pumps the required air.

There is also an interesting historical aspect to the show, with lucid descriptions of the origins of many of the instruments on display.  Lucas illustrates how the didgeridoo was probably the world’s oldest instrument, made from live eucalyptus trees as a result of termites hollowing out the bark. The unique purpose of the boomerang is also explained, and in particular the way in which it is used for hunting, to scatter birds in order that they can be caught in nets. Clearly there’s a lot going on here, and despite the educational aspect of the show, still plenty of time left for some fun musical games, which the children enjoy immensely.

Lucas Proudfoot is an accomplished musician, teacher and entertainer. His shows are informative, imaginative and great fun. He has an easy rapport with the children, and a spontaneous wit. Perhaps this ability stems from his work ethic, as I’m reliably informed that he performs around forty shows a month - a number that makes me tired to even think about. The performance is almost an hour long, providing excellent value for money.  We finish with the artist asking the audience ‘hands up who had a good time today?’ Everyone put their hands up including the parents. Clearly a good time was had by all.

Hats off to Lucas Proudfoot - children's entertainer extraordinaire!
Posted by Dez Staunton at 11:31 No comments: