Animal Farm are a quartet from Chicago, who perform a colourful blend of music, storytelling and comedy suitable for children of all ages.  "Slow Down" is taken from their latest album, and is something of a melodic masterpiece. The song highlights the problems we all face in a hectic and fast-paced world. The solution is provided through the metaphorical journey of a snail, who despite his obvious limitations, always finds time to appreciate the beauty that surrounds him each and every day.

The video is an allegorical portrayal of this journey, where the snail moves slowly across the screen staring up at the lyrics that appear on the screen above. Here, the snail shuffles his body in time to a double bass groaning away in the background, accompanied by some delicate interplay between guitar and violin.  The snail, we are informed, takes his time 'because the roses are oh so sweet', and of course he has 'no particular place to go'.  The lead vocal is sublime, and reminded me a little of Smokey Robinson.

The verse creates the necessary space to launch the chorus, which explodes in a psychedelic cacophony of sound that is both enticing and seductive in turn. The melody is like something Coldplay might come up with on a good day, with the lyrics questioning 'how can anyone notice this beautiful world if they won't just slow down'. Additional impact is portrayed in the video which displays an array of buildings and vehicles spinning round in a circular motion, which appear to represent the planet.

The snail meanwhile ponders this predicament, incredulous, and resolute, encompassing the visual representation of what is required. Further metaphors of snail mail, which may take 'three to five days', are also featured with a number of signed, sealed and delivered envelopes floating across the screen in turn. These are then swiftly replied to with speedy texts that clearly don't get the message. Speed is further represented in the video by cheetahs and eagles who are impressive, but of no concern to the snail who is quite happy 'chilling on the garden floor'.

The song then once again explodes into another uplifting chorus, swimming in melancholy, and pining with a certain nostalgia for the way things were.  The lyrics further emphasise the central message of the song, that you can ultimately never be happy if this state of affairs continues.

The video then portrays footsteps on the screen representing movement, and at this point the musical depth and lyrical potency of the song, rekindle memories of Pink Floyds "On The Run", or perhaps "Time" from "The Dark Side of the Moon". Yes, you heard me, that's right Pink Floyd, so if the band are trying to reach all age groups they are on the right track here.

A wonderful song, an inspiring video, a tremendous message, and beautiful musicanship performed throughout. Animal Farm really cut the mustard when it comes to highlighting problems, finding solutions, and entertaining us in the process. All in all, three minutes of sheer magic that deserves your immediate attention.

Animal Farm - live in the moment.

Flash Single Review: It's So Easy Being Green - Esther Crow 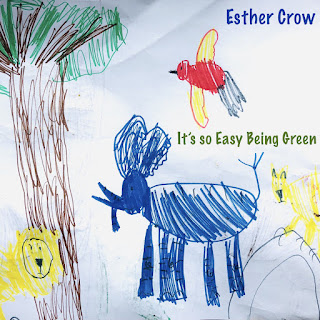 "It's So Easy Being Green" is the fabulous new single from Esther Crow an award-winning songwriter from New York City, and founding member of post-punk rockers The Electric Mess. In addition to being an environmental warrior, she is also a teacher and part-time actor, although where she gets the time, I have no idea. I came across this song recently when I was browsing through Spotify, and I was absolutely blown away by the potency of the lyric and the power and precision of the music.

The song incorporates a delightful call and response technique, where a series of environmental challenges are brought to our attention, and are then disarmed with noticeable flair and lyrical dexterity. Whether this involves 'picking up bottles on the beach', or eating 'more veggies less meat', there are a variety of solutions on display.   Incidentally, it is none other than the artist's son Vincent, who steps in to pose these dillemas, ensuring that the song is indeed a truly family affair.

The music has wonderful energy, and further benefits from a slightly sixties flavouring, where jangly guitars meet inspired vocal melodies to complete the three chord magic. The vocals are clear, nonchalant and easy to decipher, revealing perhaps a slight Dylan influence on occasions. The chorus sums up the sentiment succinctly,  informing the listener to 'save the planet change your habits', a message that I'm sure we would all support.

This is a truly great song, where somehow the artist has managed to cram copious ideas into a tight space, and yet still come up shining with pop sensibility. The bass and drums are tight and punchy, with the music at times slightly reminiscent of Blondie at their best, which is no bad thing. The music is loaded with attitude, and despite the charming melodic content, you can hear the gutsy post-punk New York delivery just beneath the surface.

This artist is pure class, she has a fantastic message, a great sound, a superb band, and a fabulous generosity of spirit. Perhaps most importantly, she has delivered a song for our times, and done so with style, substance and certainty.

Posted by Dez Staunton at 15:19 No comments: