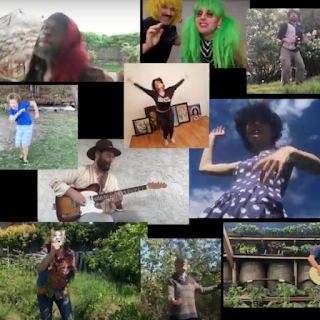 The Oot n’ Oots are a five-piece family band from Kelowna, Canada. They have released two albums to date and their new single "Thank You Universe" is really quite superb. The song is built around an infectious rhythm, a mesmerising hook, and a potent message which should have you up and dancing in no time.

The music is hypnotic and lively, featuring lyrics that express a message of gratitude in a universe full of possibilities.  The chorus really captures this sentiment of appreciation 'for letting me be me', and 'for letting me be free'.  Initially, it sounds like a feel good song, but despite the celebratory tone, the haunting backing vocals, reveal a sense of mysticism, intrigue, and a hint of what is to come.

The song operates on numerous levels, and is much deeper than it may appear on first listening. There is a multitude of mayhem going on in the background, with layer upon layer of delightful sound effects sprinkled throughout the track in all their magnificent glory.  In this sense, the music appears to represent  the universe experiencing itself, through a magical cacophony of sound. I'm sure even Deepak Chopra would be impressed.

Although the arrangement is complex, the song is great to dance to, and remains both hypnotic and commercial, despite its esoteric charm.  The lyrics at times, reflect this musical gravity, highlighting the challenges of life, and how sometimes we 'may suffer', or 'feel pain'. However,  despite this introspective diversion, the optimism soon returns, and we are reminded that life is still very much 'a gift'.

This is a song to make you dance, smile and maybe reflect on life.  It is lively, compelling, and hugely appealing, but quite different from anything else around.  It exudes a kind of controlled chaos, propelled through a hypnotic beat that never lets up. Perhaps the most salient point is the spirit in which the song has been written.  Not as a reaction or statement to these uncertain times, but as a  genuine reflection of gratitude and love.

Make sure you also check out the video featuring a selection of the band's devotees from around the world lip-synching to the chorus; the kids will love it.

The Oot n’ Oots - a message of gratitude in a universe of possibilities.

Posted by Dez Staunton at 09:09 No comments: